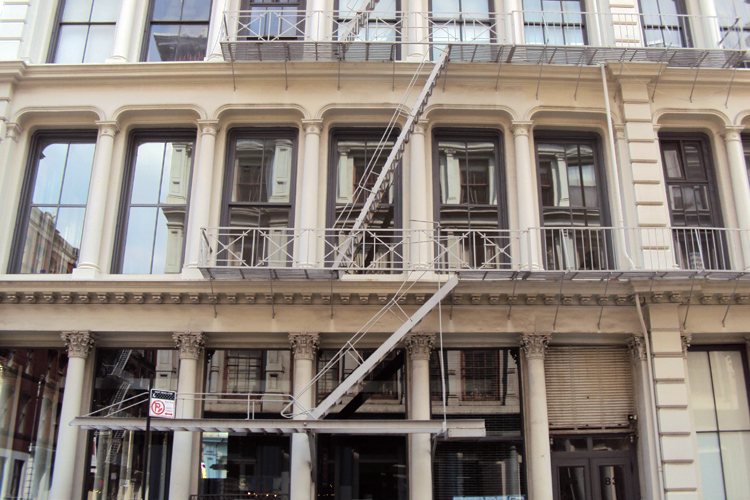 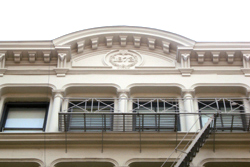 83-7 Grand Street was designed in 1872 by William Hume and built for James Fisher. Hume designed many important buildings in New York City during this era including the Hotel Netherlands and the Colonial Clubhouse. He designed the cast-iron silk warehouse for James Fisher in neo-Grecian style. Tenants today include Team Gallery and Boffi Soho. Lofts are located on the upper levels.

83-7 Grand Street was erected during the boom after the Civil War, which was responsible for transforming Soho from the city’s entertainment district into a commerce district. William Hume designed the cast-iron silk warehouse in a modified neo-Grecian style in 1872 for James Fisher. Hume was originally an architect in the southern United States working primarily out of Nashville. He began his New York City practice in 1855. He designed many important buildings in New York including the Colonial Clubhouse, Hotel Netherland, and the Emigrant Savings Bank. He was later joined by his son and formed the firm W.H. Hume & Son in 1994. William Hume died in New York City on November 11th, 1899.

Tenants today include the Team Gallery at No.83 and Boffi Soho at No. 85. The upper levels of 83-7 Grand Street currently contain high-end lofts.

The Grand Street building sitting on the southwest corner of Greene Street was designed in neo-Grecian style. The nine window bay cast-iron façades facing Grand Street and Greene Street are identical. Fluted Corinthian columns with a modillioned cornice above separate the window bays on the ground floor. The window bays on the remaining floors have smooth shafted columns with capitals decorated with three small rosettes separating them. The floors are each divided by a projecting cornice.

The four lower floors of the building are outlined with repeated quoins that serve as a demarcation between the westerly three bay unit, which added in 1883, and the other six bays. The quoins are replaced with paneled piers with brackets on top on the fifth floor. The building has a curved pediment with the date “1872” inscribed on it over the central two bays of the original part of the building.