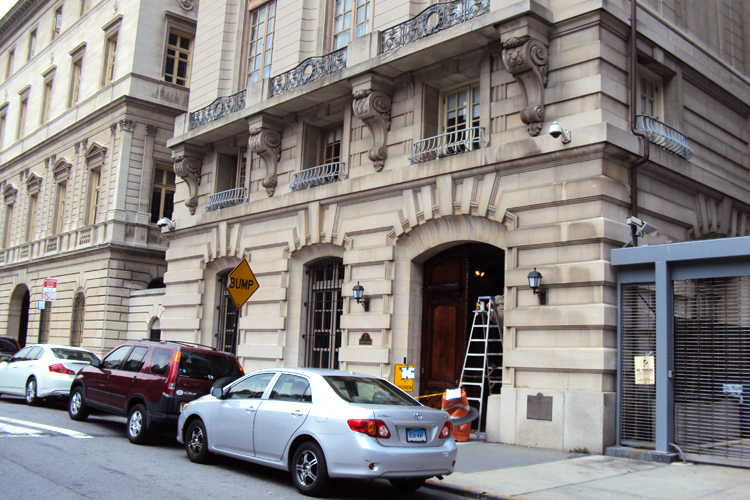 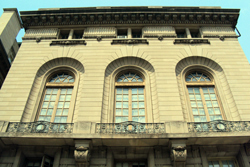 The imposing French limestone mansion located at 7 East 91st Street was built for steel manufacturer James A. Burdon and his wife Adele Sloane Burden. Adele was the great granddaughter of Commodore Cornelius Vanderbilt. Her parents commissioned architect Whitney Warren to design and build the mansion as a wedding present for the couple in 1902. Warren was a preferred architect for the Vanderbilt clan and was concurrently working on designing Grand Central Station at the time he was commissioned for the Burden Mansion. The Convent of the Sacred Heart has owned the Burden Mansion since 1940. The building was designated a landmark in 1974.

The Italian Renaissance style mansion that stands majestically at 7 East 91st Street was designed by architect Whitney Warren and built in 1902 for James A. Burden and his wife Adele Sloane Burden. Warren was a noted architect and also designed Grand Central Station. Burden was a steel manufacturer and his wife was the great granddaughter of Commodore Cornelius Vanderbilt. Mrs. Burden loved to entertain on the mansion’s lavish 3rd floor, a tradition that has been passed down and is still practiced today by the current owners.

Over the last the decade, Carnegie Hill was largely passed over by demolition and rebuilding efforts that took hold of the city. Today, many people consider Carnegie Hill to be amongst the most historically charming neighborhoods in New York City. There are numerous prominent residences that call Carnegie Hill home today including Woody Allen and Sony Corporation CEO Sir Howard Stringer. The Landmarks Preservation Commission hailed the Burdon Mansion as “the finest Beaux Art townhouse rooms in the City”. The building was commissioned as a landmark in 1974. The Convent of the Sacred Heart purchased the Burden Mansion in 1940; currently, their lower school occupies the space. In 1994, the Convent spent $250,000 to clean and make minor repairs to the building.

The four-story Italian Renaissance mansion located at 7 East 91st Street is constructed of French limestone. Each of the four stories is a different height. The third floor has three over-sized windows that provide ample light for the ballroom. There is a decorative cast-iron balcony that stretches across the third floor. The roof is topped with a classic balustrade. The mansion’s interior, which is designed in French style, is equally as lavish. Arguably the most impressive detail is the grand spiral staircase constructed of Hautville marble at the entrance of the building. However, the entire interior is decorated with lavish detail such as elegant mirrored doorways, gold leaf accents on the walls, and marble parquetry floors.