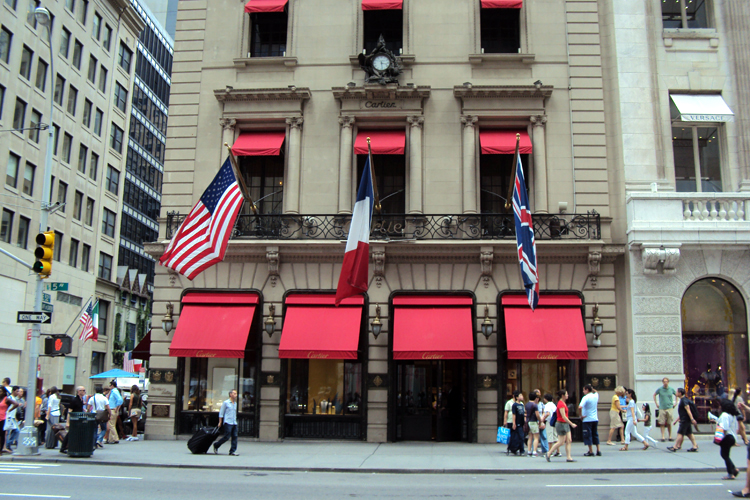 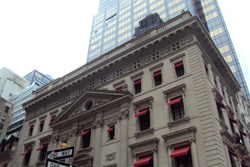 Cartier’s New York store is located at 651 5th Avenue. Cartier is a renowned French jeweler and watchmaker. The store was originally built in 1905 as the residence for Morton Freeman Plant, the son of Henry Plant who founded the Plant System of railroads, steamship lines and hotels. Plant sold the residence in 1917 to Cartier, who was looking to expand their New York store, for $100 and a $1,000,000 double strand pearl necklace that his wife fancied.

The fashionable mansion located at 651 5th Avenue was designed by Robert W. Gibson and C.P.H. Gilbert in 1905 for Morton Freeman Plant. Morton F. Plant was the son of Henry Plant who founded the Plant System of railroads, steamship lines and hotels. He was a successful banker, yachtsman and owner of baseball teams. After his father passed away in 1899, his mother and him sold the Plant System of railroads to Atlanta Coast Line Railroad where he served on the board for many years. Plant also owned the Shore Line Electric Railway.

The property that 651 5th Avenue was built on was purchased from William K. Vanderbilt. Vanderbilt, whose own mansion was diagonally across Fifth Avenue, sold the property with the provision that it not be used for commercial purposes for at least 25 years. Plant married Mae Caldwell Manwaring in 1912. At that time he was 61 and she was 19. The couple remained in his Fifth Avenue mansion until 1917. They reportedly became dissatisfied with the rapid commercial development of the neighbor and had decided to move uptown. Mae had great admiration for one of Cartier’s necklaces; therefore, Plant arranged a deal to sell the mansion to Pierre Cartier for $100 and a $1,000,000 double strand pearl necklace. Unfortunately for the Plant, the value of the necklace decreased significantly after the advent of cultured pearls. The necklace was sold at an auction in 1957 for $151,000.

The Fifth Avenue residence was converted into a Cartier boutique by architect William Welles Bosworth in 1917. Modifications included adding the main entrance, storefront windows and sculpted clock on Fifth Avenue. Cartier is a well-known jeweler and watchmaker, originally founded in Paris in 1847 by Louis-Francois Cartier. Cartier is currently control by Compagnie Financière Richemont SA. The New York branch was setup in 1909. The move to the current location was made in 1917 to provide for more space.

651 5th Avenue were designated a landmark by the New York City Landmarks Preservation Commission in 1970.

The four-story neo-Italian Renaissance-style palazzo located at 651 5th Avenue is constructed of marble and granite with a facade three widows wide. There are converted storefront windows on the ground floor and a gold crowned entrance. A cast-iron balcony stretches the length of the second story. The roof is topped with an elegant, classic marble balustrade.