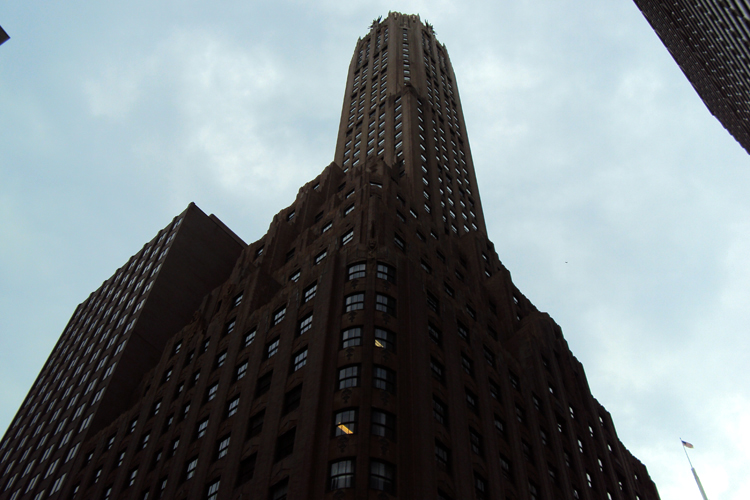 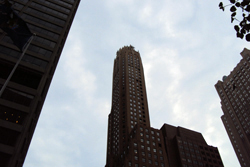 570 Lexington Avenue was originally known as the RCA Victor Building before becoming the General Electric Building. RCA Victor deeded the building to General electric prior to the building’s completion in 1931. RCA Victor hired John W. Cross of Cross & Cross Architects to design the building. The building was designed to both blend with and provide contrast against Bartholomew’s Church. The elaborate Gothic style crown is intended to represent radio waves. GE donated the building to Columbia University in 1993, renovations were made thereafter.

570 Lexington Avenue, also known as the General Electric Building, was constructed in 1931 just after the Great Skyscraper Competition, which had taken hold of New York City, marked by the construction of the Chrysler Building at 405 Lexington Avenue and 40 Wall Street in 1930 and followed by the Empire State Building in 1931. Though Cross & Cross Architects were not tasked with constructing the world’s tallest building, they were tasked with constructing a building that would compliment St. Bartholomew’s Church, which was no easy task.

The salmon brick color used for the building was chosen to both blend and provide contrast against the church. The tower was designed with the intent of providing a backdrop, when viewed from Park Avenue, which would visually enhance the church’s polychrome dome. The General Electric Building won unanimous acclaim from critics, as well as the general public, after its completion. The General Electric Building is considered one of the finest examples of Art Deco design in the world.

During the real estate depression in the early 1990’s, GE was having difficulties maintaining enough tenants to cover expenses. In 1993, General Electric Co. donated 570 Lexington Avenue to Columbia University. Shortly after, a joint venture was formed between Columbia, Bernard Mendik, and Quantum Realty Partners to redevelop the skyscraper. After the renovations, the building’s small floors once again attracted new tenants with the corporate downsizing of the 90’s.

The scene from “The Seven-Year Itch” where Marilyn Monroe stood, in her white dress, in the breeze over the subway grate was filmed one block north of the General Electric Building on Lexington Avenue.

The 50-story salmon colored, terra-cotta brick General Electric Building reaches 740 feet into the sky. The crown atop the tower, which is glazed tan brick, is undoubtedly the building’s both striking feature. Intended to be a symbolist representation of radio waves, the crown is a dynamic looking burst of limestone Gothic spires and brickwork with lightning bolt motifs. At night, the crown is illuminated from within giving it the appearance of a torch. The base of the building is constructed primarily of rose-colored granite with elaborate, generous masonry and decorative figural sculptures. Above the main entrance is a conspicuous corner clock with the GE logo. Much attention was also given to the design of the lobby. The entrance lobby has an aluminum-plated ceiling with sunburst motifs and walls of rippled pink marble.