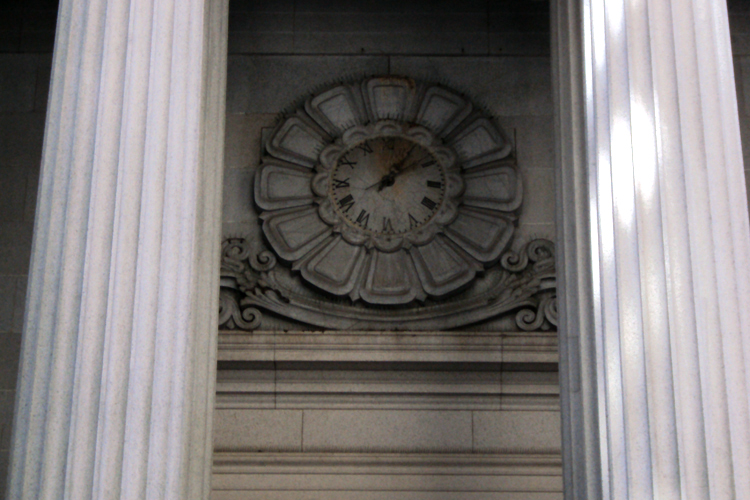 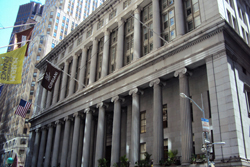 The Merchants’ Exchange was erected at 55 Wall Street between 1836-1842, after the first exchange burned down during the great fire of 1835. Architect Isaiah Rogers was commissioned to design a bigger and better exchange. The exchange failed mid-century and the building later became the New York Customs House in 1863. The National City Bank acquired the building in 1907 and had it doubled in size by New York architecture firm McKim, Meade and White. The building became the Regent Wall Street hotel in 2005 and the Cipriani Club Residences in 2004.

The first Merchants’ Exchange in New York had burned down in the great fire of 1835. Afterwards, architect Isaiah Rogers was commissioned to design a bigger and better exchange. Isaiah Rogers was a prominent American architect and practiced in Mobile, Alabama, Boston, Massachusetts, New York City, and Cincinnati, Ohio. He was one of the country’s foremost hotel architects designing such architectural gems as Boston's Tremont House, the first hotel with indoor plumbing, and the Burnett House in Cincinnati, which at the time was the most elegant hotel in the Midwest. He also designed the Boston Merchants Exchange.

The building was designed in Greek Revival style and constructed between 1836-1842. The exchange failed at mid-century leaving the building empty. In 1863, the government leased and later purchased the building, using it as the New York Customs House.

The building was later sold to the National City Bank in 1907. Bank president James Stillman believed the acquisition and reuse of this historic building as his company’s headquarters, increased his company’s prestige. The National City Bank hired architect Charles F. McKim of the firm McKim, Meade and White to double the size of the building. McKim, Mead and White was a prominent American architecture firm at the turn of the twentieth century and lays claim to some of New York’s most prominent buildings including the Metropolitan Club, Villard Houses, and the Manhattan Municipal Building.

Four additional stories were added to the building, as were twelve enormous columns at the entrance. Inside the entrance is an imposing room, which extends under a sixty-foot-high central dome. The entire interior was lavishly redesigned.

In January 2005, the building was acquired by Regent International Hotels and was renamed The Regent Wall Street. The regent Wall Street, with its 144 rooms and suites, was the first luxury hotel in New York’s financial district.

In 2004 the hotel was converted to luxury apartments, Cipriani Club Residences. Capriani, Inc. owns and manages upscale restaurants, clubs, resorts, retail shops, and residents a worldwide. The company got its start in 1931 with the opening of Harry's Bar® in Venice.

55 Wall Street was designated a New York City Landmark in 1965.

The seven-story building located at 55 Wall Street is a masterpiece in Greek Revival design. The building was built and expanded during two separate eras. The original three-story base and the added four-stored are clearly divided by a projecting cornice. Adding to the separation, giant columns span across three-stories of the four-stories on the addition and across the two top-stories of the three-story base. The bottom columns stand on a set of massive connected pedestals, which are open only at the entrance. The column capitals are traditionally stylized.