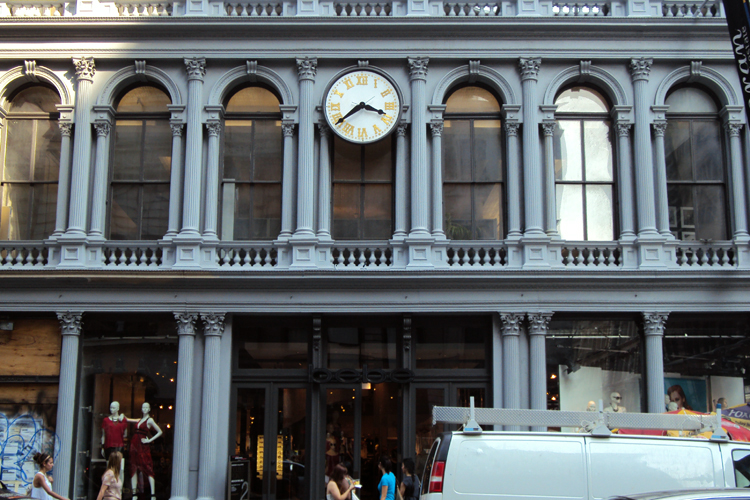 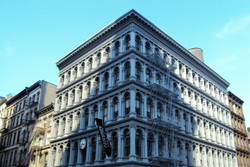 Owner Walter Langdon began constructing the structure that would become known as the E.V. Haughwout Building, years before Soho emerged from the Civil War as the city’s commerce center, most likely due to speculative advise from his real estate advisor. John P. Gaynor designed the building based on inspiration form the San Sorvino Library in Venice. The main tenant E.V. Haughwout was a manufacture of fine china, cut glass, and porcelains. Many famous patrons including Abraham Lincoln’s wife Marry visited the showroom.

During the early 1800’s, Soho had been a commercial destination for well-to-do New Yorkers. However, by the time the E.V. Haughwout Building was built, the area had fallen from grace and became New York’s first red light district. Brothels were primarily concentrated along Houston and Mercer Streets. It wasn’t until after the Civil War that the area began its transformation into a commerce and financial center.

When builder Walter Langdon began building the large structure on the northeast corner of Broome and Broadway that would become known as the E.V. Haughwout Building, he had may have speculated that the area would once again flourish as a center for commerce. Langdon inherited the land from his grandfather John Jacob Astor when he died in 1848. He later sought counsel from real estate advisor Abner Ely with regards to his property. Langdon may have consulted with his future tenant Eder V. Haughwout because the building seemed to be custom designed to house E.V. Haughwout & Company’s showroom and manufacturing facilities. The Haughwout Emporium was world famous manufacturer and distributor of hand painted china, silverware, mirrors, cut glass, porcelains, and fine chandeliers.

Architect John P. Gaynor designed the five-story, 79-foot tall, commercial building in 1857 with the cast-iron facades facing Broadway and Broome Street provided by Daniel D. Badger’s Architectural Iron Works. Gaynor gained his inspiration for the building from the San Sorvino Library located on the Piazetta in Venice. Daniel Badger was so proud of the Haughwout Building that he placed a drawling of the building on the cover of his famous catalog published in 1865.

The E.V. Haughwout building opened in March 1857. Shortly after, Haughwout had the world’s first hydraulic lift passenger elevator installed by Elisha Graves Otis. This progressive elevator helped pave the way for the tall building revolution. Many notable patrons visited E.V. Haughwout’s fashionable showroom including the Czar of Russia and the Imam of Muscat. Abraham Lincoln’s wife, Mary, shopped at Haughwout’s in 1865 and purchased a set of custom made china that had a pattern depicting an American Eagle surrounded by a wide mauve border for the White House. Gifts from the store were presented to the Emperor of Japan and King Rama IV of Siam in the age of gunboat diplomacy.

The E.V. Haughwout Building was designated a New York City landmark in 1965. In 1973, the building was added to the National Register of Historic Places. The building was in much need of restoration towards the end of the 1900s. Then in 1995, office supply store Staples moved into the space and restorations were completed. The facade was restored and the columns were painted a warm beige color under the supervision of historic preservation expert Joseph Pell Lombardi. The upper stories have been converted to loft space. Women’s clothing store Bebe moved into the building in 2011.

The E.V. Haughwout Building located at 488-492 Broadway is one of the most imposing structures in the Soho cast-iron district. The building is five stories high and stretches nine window bays wide on Broadway and fourteen window bays wide on Broome Street. The arched windows are set between fluted Corinthian columns with underlying balustrade railing. The window shapes on the group floor are slightly different than those on the upper floors. A detailed cornice rests atop several bands of elaborate frieseowork.