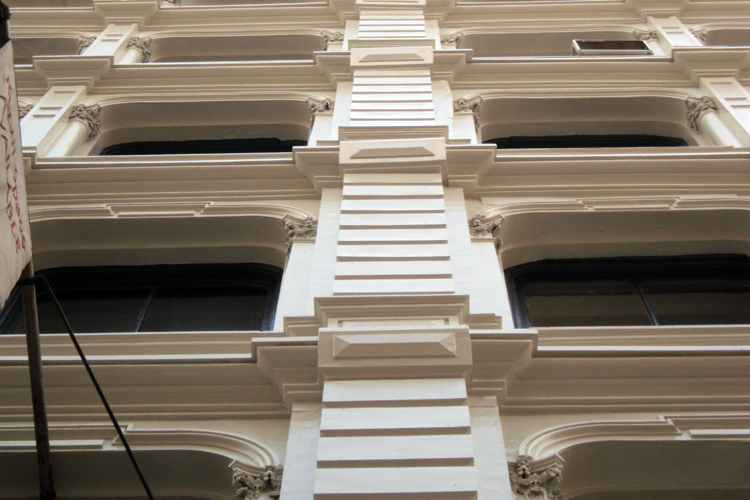 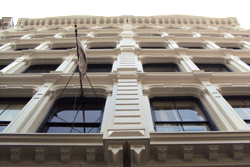 477-79 Broome Street was originally constructed in 1873 to be the headquarters, sales office and distribution center for Cheney Brothers Silk Mills. Established in 1837, Cheney Brothers was the first truly successful manufacturer of silk in the United States. They experienced exponential growth after the Civil War, as did the textile industry overall, and expanded their operations from Connecticut to New York. Construction of the building began just after the completion of the Gunther Building to the south. The architect Elisha Sniffen designed a uniquely varied façade in an effort to assert his client’s prominence over their neighbor.

Broome Street quickly developed as a center for commerce, as did Soho overall, after the Civil War. The area had previously been an entertainment district; though, its close proximity to the city’s largest business market and the North River docks made it a magnet for the influx of textile and industrial firms. City run projects such as expanding Laurens Street, now West Broadway, in the 1870s also helped fuel the areas transformation.

The Cheney Building located at 477-479 Broome Street was designed by Elisha Sniffen for Jacob Weeks. The building was originally designed to be the sales and distribution center for Cheney Brothers Silk Mills. Cheney Brothers was formed in 1837 by Ralph, Ward, and Frank Cheney, along with E.H. Arnold. They were the first really successful manufacturer of silk in the United States. Up until then silk was primarily manufactured in England and shipped to the States. The invention of the Singer sewing machine increased the need for stronger sewing thread and silk was preferred. The Cheneys began manufacturing sewing thread with machine twist in 1852. During the Civil War, progress in silk processing was stunted. However, the tariffs that were put on silk goods during the war created a need for extensive weaving of silk within the country.

After the Civil War, the company prospered extensively and expanded their operations to New York. The building replaced the old headquarters, which was located in Hartford Connecticut. Cheney Brothers was at that time the largest silk manufacturer in the United States. Construction of the building began in June 3rd 1892, shortly after the Gunther Building down the street was completed. Sniffer designed a more varied façade then that of the Gunther Building in an effort to assert his client’s prominence over their neighbor. The building was completed o February 28th 1873.

The Cheney Building was originally developed to accommodate offices on the lower floors and stockrooms above. The building towers six-stories high with each story decreasing slightly in height. A set of twin pediments a top a bracketed cornice appears to divide the building in half, each half stretching four window bays wide with balustrade railing defining the middle two window bays. There are narrow paneled pilasters that separate the windows. A quoined pilaster runs down the center of the building, which further emphasizes the divided façade. The Cheney Building has semi- flattened arches on the lower levels, and decorative urns. Corinthian columns separate the door and window openings on the ground floor. Overall the building is a classical composition of French inspired architecture.