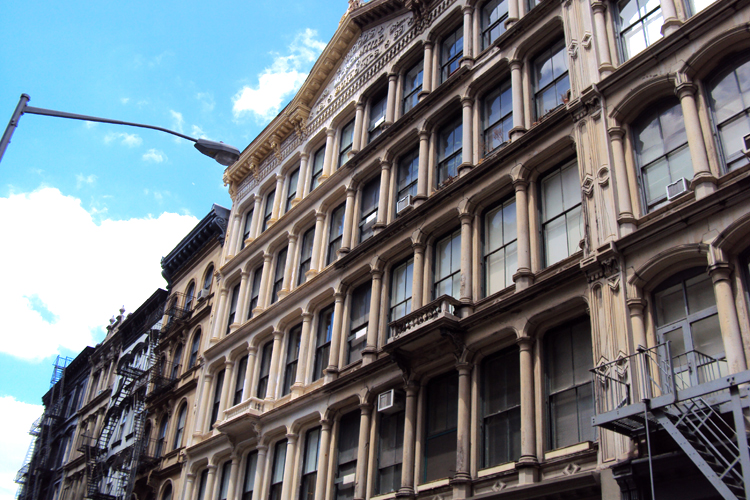 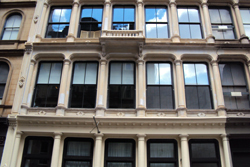 The Woods Mercantile Buildings at 46 and 48-50 White Street was erected in 1865 by dry goods merchants and Brooklyn residents Samuel and Abraham Wood during. Various importers and distributors of clothing and dry goods occupied the building during twentieth century before the upper stories were converted for residential use between 1978-84. The elegant simplicity of the building marks it has an excellent representative of the commercial buildings erected in the city following the Civil War.

Upon its opening in 1806, White Street had been a quiet middle class residential street. Immigrants from Germany and Ireland predominantly occupied the area in the mid 1800s. With the outbreak of the Civil War, the area was redeveloped with many of the private houses that had lined the streets replaced or converted for commercial purposes. International trade routes were interrupted during the war, forcing American firms to rely on domestic rather than imported products. As a result, the textile industry in the northern states flourished. White Street was the textile center of the city. After the war, the area emerged as the dry goods trade center for the country. New construction completely transformed the area from being primarily made up of residential houses to cast-iron and marble warehouses.

Much of the new construction was developed for utilitarianism with cubic, flat-roofs and flat surfaces. Large windows provided greater natural lighting for interiors and usable floor space. The buildings were inspired by Renaissance style architecture. Pediments, columns and ornamentations were added to attract the upper class.

The Woods Mercantile Buildings at 46 and 48-50 White Street was erected by dry goods merchants and Brooklyn residents Samuel and Abraham Wood during 1865-1867. The site was previously divided into three lots. The new construction, which stands today, consisted of three five-story buildings that were united into one broad structure. The J.B. & W.W. Cornell foundry manufactured the one-story cast-iron storefront. In 1917, a doorway was added to connect the building to No. 44.

The Wood family’s importing business eventually grew into the Wood’s Dry Goods Commission Agency, which was headquartered on Broadway during the early twentieth century. The Woods Mercantile Buildings remained in the family for almost a century. Occupants during that time period included various importers and distributors of clothing and dry goods including the J.R. Leeson & Company, the largest importer of linen-thread. A company that stored, mixed, -74.002833and sold dry dyes later occupied the building. Between 1978-84 the upper stories were converted for residential use.

The Landmarks Preservation Commission approved the renovations proposal prepared by architect Ben Hansen and delivered on January 15th, 2007. The proposal was part of a plan to develop luxury loft condos known as the Wood's Mercantile Lofts. The renovations consisted of removing the original diamond plate steps, installing new painted wood, replacing the skylight, enlarging the masonry window openings, demolishing the original roof, and constructing a two-level rooftop penthouse. The newly converted Wood's Mercantile Lofts with soaring 16-foot ceilings, key-locked elevator, and exposed brick walls were made available in 2009. As of August 2011, half of the building had been painted a beige color while the other half remained a dreary dust color.

The Wood’s Mercantile Buildings at 46 and 48-50 White Street were designed as a single unit in a simplified style inspired by Renaissance architecture. The five-story, ten windows wide store and loft building has a cast-iron storefront at the base with Tuscan polygonal pedestals supporting an unadorned fascia and is united by a marble modillion cornice and pedimented roof. "Woods Mercantile Buildings" and the date "1865" is inscribed on the pediment. The windows are recessed square-headed bay windows with rounded corners, which are repeated in a uniform manner across each floor. Molded bandcourses with end blocks separate each story. The façade has two balconies on the third floor at the third and sixth window bays.