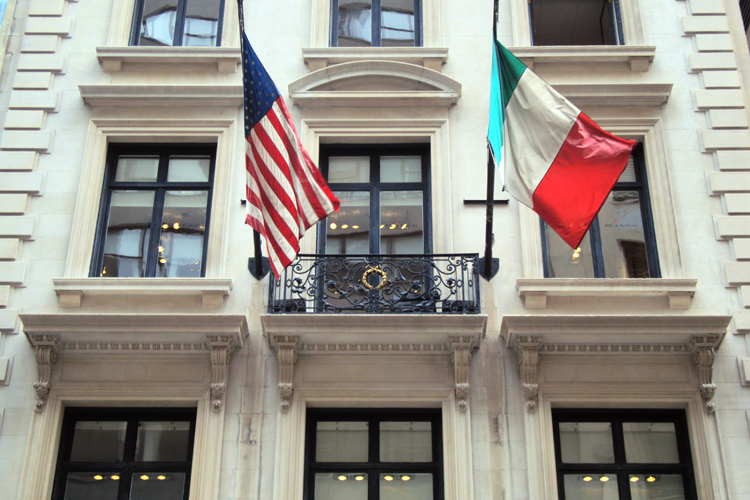 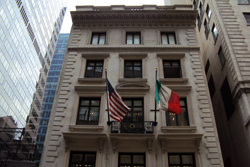 The white marble mansion located at 4 East 54th Street was originally designed by McKim, Mead and White for eccentric millionaire William Earle Dodge Strokes and his 19-year old wife. However, their marriage was short-lived and Stokes sold the property before its completion in 1899 to William H. Moore and his wife Ada. Moore was the founder of U.S. Steel, American Can Company, Diamond Match Company and National Biscuit Company. Moore’s widow remained in the mansion until her own death in 1955. The Banco di Napoli purchased the mansion in 1993.

The prominent architecture firm of McKim, Mead and White was commissioned to build 4 East 54th Street in 1900 for eccentric millionaire William Earle Dodge Strokes and his wife. The 43-year old Strokes was immediately smitten by 19-year old Rita Hernandez de Alba Acosta when he first saw her outside the construction site of his extravagant Ansonia Hotel on Broadway. The couple was married on January 3rd 1895 during a highly publicizes ceremony at the bride’s parents’ mansion at 48 West 47th Street. Strokes preferred not to engage in social affairs and was often perceived as being odd; however, he attempted to fit in for his wife’s sake. In 1897, the couple rented the Newport cottage of James Bennett where Rita hosted a dinner party.

A year later, Stokes purchased two four-story brownstones at Nos. 4 and 6 East 54th Street from Mrs. Caroline G. Reed for $140,000. McKim, Mead and White was tasked with designing and building a white marble mansion in place of the brownstones. The firm produced an Italian Renaissance style town house worthy of 5th Avenue. However, the couple’s relationship was strained. Stokes sold the mansion on December 14th 1899, just prior to its completion, for $325,000. Four months later Rita filed for a divorce.

William Moore died in 1923. Ada remained in the Italianate mansion until her death in 1955. The home was later used by a succession of commercial and charitable tenants until 1993 when the Banco Di Napoli purchased the mansion from the government of Indonesia for $12.8 million. The previous tenants had not disturbed the original interiors. The original stained glass, winding marble staircase, inlaid floors, and the ceiling details were all intact. The Banco Di Napoli commissioned Americon, Inc. to restore and renovate the structure, which included adding two floors. The building is a magnificent survivor from the 5th Avenue residential era. 4 East 54th Street appears today much as it did when the Moore’s first entered the house in 1900. Italian clothing store Kiton currently occupies the storefront.

The elegant Italian Renaissance style mansion at 4 East 54th Street stretches three windows wide and is five stories tall. The rusticated ground floor is protected behind a marble and cast-iron fence. A carved marble balcony stretches the length of the second story. There is also a small cast-iron balcony outside the middle window on the third floor. The roof is topped with a elegant, classic marble balustrade railing.