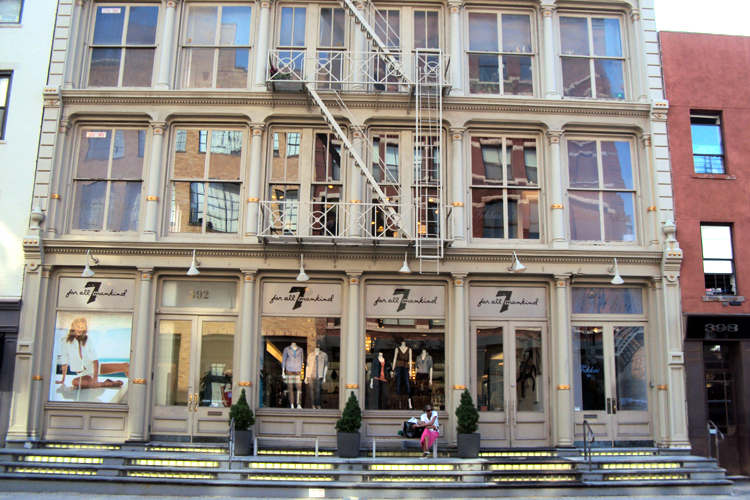 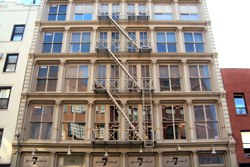 The five-story, cast-iron store and loft building at 392 West Broadway was designed in Italianate style by John H. Whitenack and built between 1872 and 1873 for Jeremiah W. Dimick. Whitenack was born in New Jersey in 1840. He opened an architecture office in Manhattan on 1887; though, he was active in the city prior to that. In addition to 392 West Broadway, he also designed 422 West Broadway.

The building was erected shortly after Laurens Street, now West Broadway, was expanded as one of the many projects that the City of New York embarked upon in the 1870s to help fuel Soho’s transformation from an entertainment district into a commerce district. Laurens Street was widened to accommodate the elevated train by demolishing many buildings on the west side of the street. The Boyce & McIntire foundry provided the building’s cast-iron facade.

Over the years 392 West Broadway has had a variety of tenants including M. Stachelberg & Company cigar factory in 1885, Ackerlind Steel Company in 1961, the John T. Gibson Gallery from 1973-83, Chris Lehrecke furniture studio in 1993, Holly Solomon art dealer and Andy Warhol model from 1975-83, and Smith & Hawken outdoor furniture from 2005-2009.

The façade has been well maintained and is remarkably intact today. The façade had been painted forest green on the ground floor and medium gray on the upper floors. The cornice was painted gray with green paint used to define the once faded date of construction, 1872, in the center of the arched pediment. However, today the building is painted beige with gold trim and is occupied by 7 For All Mankind clothing store.

392 West Broadway is six window bays wide and stretches four stories above a tall ground floor. The first story has paneled corner columns with bracketed capitals topped by urns. Metal framed show windows with molded enframents on the ground floor are divided by fluted and branded columns with rosettes capitals. There is a molded and denticulated crown with bracketed lamps above the first story. The upper stories have rusticated corner columns with bracketed capitals. Cast-iron columns with capitals divide the window bays and support the curved lintels above the windows. There are molded crowns above the second, third, and fourth stories. The roof is lined with a bracketed cornice with modillions, frieze panels, and a curved gable. The center panel is inscribed with the construction date “1872” and is flanked by scrolls.