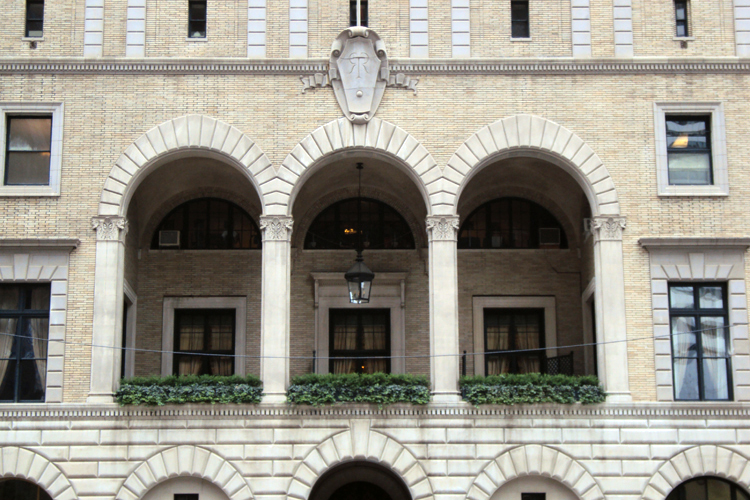 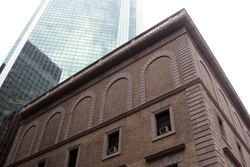 The New York Racquet Club first opened in 1876 at 55 West 26th Street with only one racquet court. In 1891, the club moved to 27 West 43rd Street, which had one racquet court and one tennis court. By 1916 the club had grown large enough for a proper home. The famous architecture firm of McKim, Mead and White, whom also designed the Metropolitan Club, designed the building and construction began. The club moved into its new home in 1918. The club is famous for its men-only membership policy. Numerous world champions have been club members.

During the late 1800s numerous clubs themed around business, the arts, and athletics had been established in New York City. The New York Athletic Club, founded in 1868, was the city’s first athletic club. The New York Racquet Club followed suit and opened in 1876 at 55 West 26th Street. The club opened with only one racquet court. In 1891, the club moved to 27 West 43rd Street, which had one racquet court and one tennis court. The club is famous for its men-only membership policy, which is still strictly enforced today.

The New York Racquet and Tennis Club’s current home located at 370 Park Avenue was designed by Charles Follen McKim of McKim, Mead and White. McKim, Mead and White was a prominent American architecture firm at the turn of the twentieth century and lays claim to some of New York’s most prominent buildings including the Metropolitan Club, Villard Houses, and the Manhattan Municipal Building.

Construction on the Italian Renaissance palazzo style building began on December 20th, 1916 and was completed September 7, 1918. The builder was a man named Mark Edlitz and the estimated cost of the project was $400,000. Historically, the style of the building was popular for men’s clubs in England. The style eventually made its way to the United States in the nineteenth century.

Today, the building plays an important architectural role on Park Avenue by providing contrast against its modern glass clad neighbors. The club sold its air rights some time ago and now a glass skyscraper centered immediately behind the clubhouse. The building was listed on the National Register of Historic Places on July 13, 1983.

The height of the five-story building is exactly two times the width along Park Avenue or 200 feet by 100 feet (30m x 60m). The building’s exterior is stone and brick over a steal frame. Originally there were three dining rooms, a billiard room, lounge, library, gymnasium, four tennis courts, four squash courts and two racquetball courts.