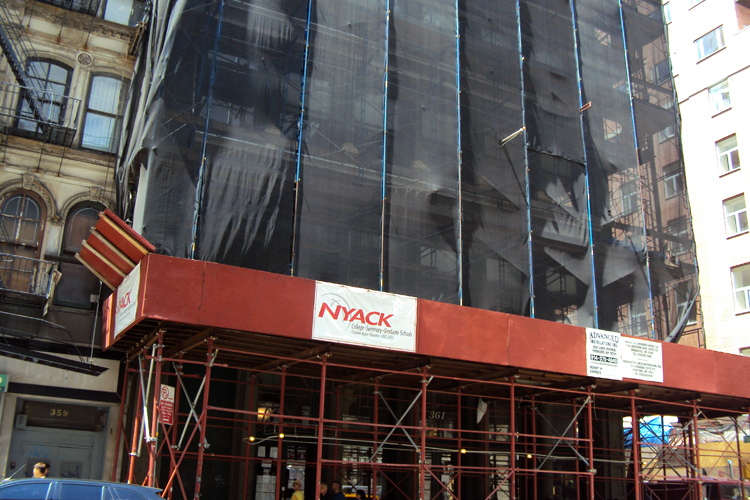 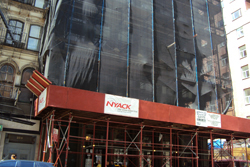 The six-story iron front building at 361 Broadway was formerly known as the James J. White Building. It designed by W. Wheeler Smith and built between 1881 and 1882. Smith was a well-known architect, self-made millionaire and philanthropist. 361 Broadway was one of the last cast-iron buildings developed after the boom in the area following the end of the Civil War. 361 Broadway was once home to Scientific American and textile concerns. Today, the building is part of Nyack College.

The building at 361 Broadway was one of the last cast-iron buildings developed in New York after the post Civil War boom, which turned Tribeca into the dry goods trade center for the country. Most of the new construction that sprung up in the area during this era was developed for utilitarianism with cubic, flat-roofs and flat surfaces. The buildings had large windows, which provided greater natural lighting for interiors and usable floor space. 361 Broadway followed suit.

The building was originally known as the James J. White Building. It designed by William Wheeler Smith and built between 1881 and 1882. William Wheeler Smith, professionally know as W. Wheeler Smith, was an accomplished American architect and developer active in the late-nineteenth- and early-twentieth-century in New York City. He was born in 1838 and died in 1908. Smith had offices located at 17 East 77th Street and 971 Madison Avenue in New York City. He was a self-made millionaire and noted philanthropist. Smith was known for designing many important buildings in New York City including the St. Nicholas Collegiate Reformed Protestant Dutch Church and the College of Physicians and Surgeons of Roosevelt Hospital, both of these buildings have since been demolished. Smith also designed the Syms Operating Theater in Roosevelt Hospital, which still remains today.

The building at 361 Broadway was once home to Scientific American and textile concerns. Today, the building houses a branch of Nyack College. The building has not aged well in recent years. Its surface is tinted with rust and paint is flaking off exposing metal. As of August 2011, 361 Broadway was being renovated and was hidden under scaffolding.

The six-story iron front building at 361 Broadway was designed in neo-Grecian style. Slender columns define the windows and doors on the ground floor. The ivy-sketched columns stand on pedestals and have stylized capitals, above which are cast iron rosettes. There is a small raised pediment positioned over the two central window bays on the Broadway facing façade.