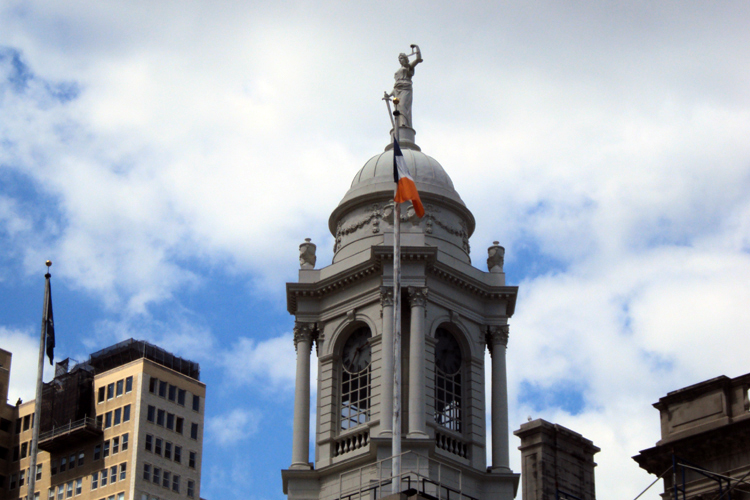 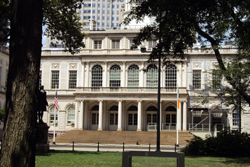 City Hall is the seat of New York government and houses the Mayor’s Office and chambers of the New York City Council. Though its New York’s third City Hall, the current building is the oldest functioning City Hall building in the United States. The design for the building was selected during a competition held in 1802. Prominent architects John McComb Jr. and Joseph Francois Mangin created the winning design. The building took nearly a decade to construct and didn’t officially open its doors until 1812. City Hall is a designated New York City Landmark. Tours are available to the public on weekdays free of charge.

The current City Hall building, located in City Hall Park at the southern end of the Civil Center, has been functioning as the seat of New York City government since 1812. The Mayor’s Office and chambers of the New York City Council are located there. The building is the oldest functioning City Hall in the United States.

New York City’s first City Hall was built by the Dutch in the 17th century and located in the old City Tavern on Pearl Street. In 1700 a new City Hall was built at Wall Street and Nassau Street, where the 1833-1842 Federal Hall National Memorial is currently located. City Hall was renamed Federal Hall when New York became the first capital of the United States. Discussions about a newer City Hall began as early as 1776; however, the Revolutionary War delayed progress.

In 1802, a competition for the design of the new City Hall was held. 26 design proposals were submitted. First prize, including a prize of $350, was awarded to John McComb Jr. and Joseph Francois Mangin. Both were prominent architects. McComb had designed the Hamilton Grange on Convent Avenue, the James Watson House on State Street, and Castel Clinton in Battery Park while Mangin was well known for designing the Old St. Patrick’s Church on Mott Street. McComb’s father had actually work on renovation to the old City Hall in 1784. Furthermore, Mangin was the City Surveyor in 1795 and published an official City Map. The old Common at the northern limits of the City was chosen as the site for the new City Hall.

Construction did not begin until 1803 due to objections from the Common Council that the design was too expensive. As a result, measures had to be made to reduce the cost, including reducing the overall size of the building and using brownstone instead of marble in the rear of the building. The construction of the building took nearly a decade. Labor disputes and a yellow fever outbreak delayed progress. The building was dedicated in 1811 and officially City Hall opened its doors in 1812.

The Governor’s Room is where official receptions are held. Numerous noteworthy dignitaries have been hosted there including Albert Einstein and Abraham Lincoln. One of the countries most impressive collections of 19th century American portraiture and artifacts are also housed there.

Various renovations have been made to the exterior over the years. The domed tower in the center was rebuilt in 1917 because of damages resulting from two fires. The original brownstone in the rear along with the deteriorated Massachusetts marble façade was replaced with Alabama limestone in 1954-1956.

On July 23rd 2003, City Hall was the scene of shooting. A man named Othniel Askew shot and killed City Councilman James E. Davis from the balcony of the City Council chamber. Askew was a guest of Davis’ at City Hall that day but was a political rival of his. A police offer retaliated by shooting Askew. Security at City Hall has since been increased. Public access to the building is restricted to tours and to those with specific business appointments. Tours are available Monday through Friday and are provided free of charge.

City Hall is a designated New York City Landmark and is also listed on the New York State and National Registers of Historic Places. As of August 2011, renovations were being made to the exterior of the City Hall Building.

The exterior of City Hall was designed in French Renaissance style while the interior was inspired by American-Georgian style. The building consists of a central pavilion, topped by a distinctive cupola, and two wings. There is a columned entrance portico crowned with balustrade railing. The front facade was originally constructed of white marble and the rear was brownstone. However, the entire façade was replaced with Alabama limestone between 1954 and 1956. The interior of the building is equally as impressive with a grand rotunda and a marble double staircase rising up to the second floor.