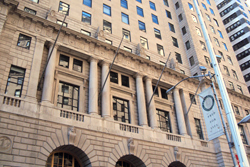 The Twenty-five Broadway Corporation, with Cunard Steamship Line as the primary occupant, built 25 Broadway in 1920-1921. Novia Scotia businessman Samuel Cunard founded Cunard in 1840. The company pioneered transatlantic shipping and travel. Prior to moving into 25 Broadway, Cunard has maintained a presence on or near Bowling Green since the mid-nineteenth century. Architect Benjamin Wistar Morris in partnership with his former employer architecture firm Carrere & Hastings designed the building.

The site of 25 Broadway has long been associated with maritime trade and travel. Dating back to 1660, the location was home to several Dutch colonial dwellings including that of Lucas Andries who was a skipper and part owner of a trading yacht. In the early twentieth century, the Russian-American Line Steamship Company was located was located on the northeast corner of the block. By the time construction began on the Cunard Building, New York had become the largest city and busiest port in the world.

25 Broadway was built in 1920-1921 by the Twenty-five Broadway Corporation, an affiliate of Cunard Steamship Line Ltd. The building was constructed under the agreement that Cunard would be the principal occupant. Cunard was founded in 1840 by Novia Scotia businessman engaged in banking, lumbering, shipping, and shipbuilding, Samuel Cunard. The Cunard Company pioneered transatlantic shipping and travel.

Since the mid-nineteenth century, Cunard has maintained a presence on or near Bowling Green. The company was initially based out of 4 Bowling Green, where it remained for many years. The site was known as “Steamship Row” for ticket-booking agents that were located there. Steamship Row was replaced by the United States Custom House in 1899-1907. Consequently, Cunard moved offices to 29 Broadway and 21-24 State Street before relocating its headquarters to 25 Broadway.

Architect Benjamin Wistar Morris III in partnership with his former employer architecture firm Carrere & Hastings designed 25 Broadway, which was completed in 1925. Morris was educated at Trinity College in Hartford, Columbia University, and the Ecole des Beaux-Arts in Paris. While working as an apprentice for Carrere & Hastings he collaborated on the firm’s award wining design of the New York Public Library. Morris setup his on practice in 1910. He won high praise for his design of the Cunard Building.

While the limestone façade is elegant, imposing, and stately, the main building’s most impressive asset is the grand ticketing hall located in the lobby, which was designed for Cunard. It is inside this lobby where passage on such liners as the Queen Mary and the two Queen Elizabeths was purchased. Morris collaborated with muralist Ezra Winter who produced a decorative program focused on shipping themes. The lobby is awash with starfish, seahorses, shells, sirens, and Christopher Columbus’ sailing ships the Niña, the Pinta, and the Santa Maria.

Not long after the building was completed, Cunard suffered during the Great Depression of the 1930s. Cunard merged with WhiteStar Lines in 1934 and together the company carried over of North American passengers. After peaking in 1957, sea traffic continued to decline due to increased competition from air travel. By 1966-67, Cunard sold its grand buildings in many cities including 25 Broadway and relocated to 555 Fifth Avenue. 25 Broadway had sadly remained vacant for a while before it was taken over by the U.S. Post Office in 1976.

The Cunard Building was designated a landmark by the New York City Landmarks Preservation Commission on September 19, 1995.

The Cunard Building’s Broadway Façade is clad in Indiana limestone. The four-story rusticated base has five double-height arched entrances crowned with carved keystones. The upper portion of the base has an open gallery or loggia. The central section above the base is slightly recessed. The Morris Street elevation has a granite watertable, two-story limestone base, and a central court, which separates the limestone east wing from the tan brick and limestone-trimmed west wing. The Greenwich Street elevation has a granite basement above, which is a three-story arched opening with two metal balconies.