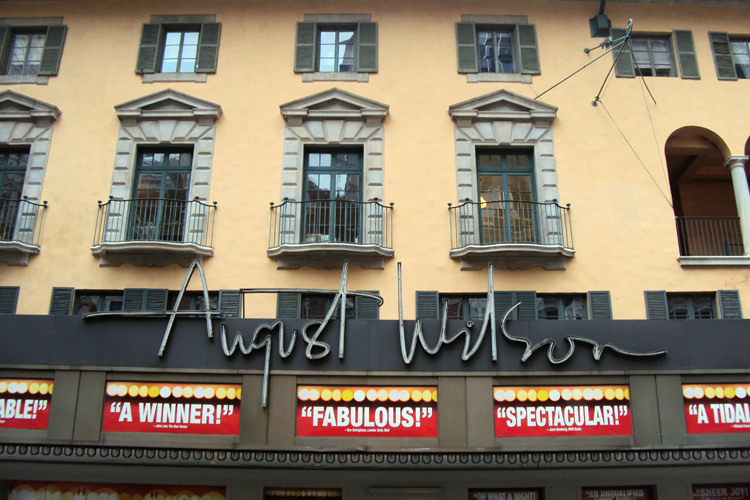 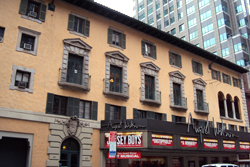 The Guild Theater, as it was originally called, was erected in 1924-1925 for the Theater Guild. The Theater Guild was a theatrical society founded in 1918. Architects C. Howard Crane and Kenneth Franzheim designed the theater. Crane specialized in the design of movie palaces. The theater was leased as a radio studio in 1943 then sold to the American National Theater and Academy and renamed the ANTA Theater in 1950. In 1981, the theater was purchased by Jujamcyn Theaters and named the Virginia Theater for its owner. The theater was renamed for playwright August Wilson after his death in 2005.

Since the turn of the 20th century, New York’s theater district has been concentrated around Times Square. However, the Theater Guild, a theatrical society founded in New York City in 1918, was operating out of Garrick Theater, which was located further downtown on 6th Avenue and 35th Street. The Guild believed much of their audience was lost to uptown theaters. Therefore, they commissioned the design and development of a new home, with heavy support from patrons, in 1923. The Guild Theater (as it was originally called) was erected in 1924-1925.

For years after the concentration of legitimate theaters moved north of Times Square the Theater Guild, founded to present high-quality plays, was operating out of its quarters on 6th Avenue and 35th Street, the Garrick Theater, built by Ned Harrigan in 1890. The Guild, believing much of its audience was lost to the uptown theaters, commissioned its new home in 1923 and the Guild Theater, with heavy support from its patrons, was erected during 1924 to 1925.

Architects C. Howard Crane and Kenneth Franzheim designed the theater in partnership with prominent local contractor A.W. Stoolman. Crane, who was born in Hartford, Connecticut and primarily based out of Detroit, specialized in the design of movie palaces in North American.

The Guild Theater opened in 1925 with a revival of George Bernard Shaw's Caesar and Cleopatra. An impressive list of shows was produced at the Guild in the 1930s; however, theater struggled to gain popularity.

The Theater Guild was leased to WOR-Mutual Radio as a studio in 1943. In 1950, the theater was purchased by the federally-funded American National Theater and Academy renamed the ANTA Theater. Due to the theaters lack of support form patrons, it became a subsidized house in 1968. Only a few productions were mounted throughout the entire 1970s. In 1981, the theater was purchased by Jujamcyn Theaters and named the Virginia Theatre for owner Virginia McKnight Binger. The theater became a success under Jujamcyn’s management by focusing on smaller musicals and revues.

On October 16, 2005, fourteen days after American playwright August Wilson's death, the Virginia Theater was renamed the August Wilson Theater in his honor. August Wilson’s work included a series of ten plays, The Pittsburgh Cycle, for which he received two Pulitzer Prizes. Each of his plays is set in a different decade, depicting the comic and tragic aspects of the African-American experience in the twentieth century.

Over the past 85 years, the 1525 seat theater has operated as a vaudeville house, legitimate theatre and movie house. After three decades of being primarily focused as a movie house, the theater produced a live performance called Songs of America in May 1991. The show was a hit and sold out.

Numerous grants and donations have been made in an effort to renovate the theater and restore it to its original glory. In December 1999, a $900,000 grant was made by the State of Illinois, a $50,000 donation was made by the News-Gazette, and numerous other donations have been provided by other organizations to help with the restoration effort. In August 2011, Jersey Boys was showing at the August Wilson Theater (formerly the Virginia Theater).

The theater was designated a landmark by the New York City Landmarks Preservation Commission in 1985.