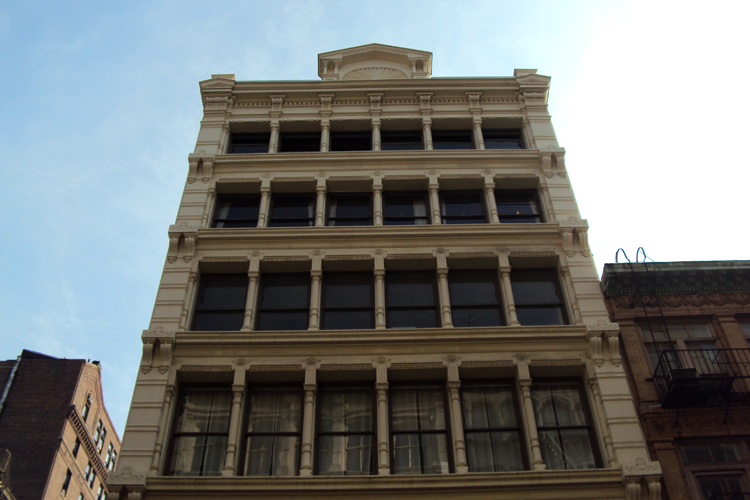 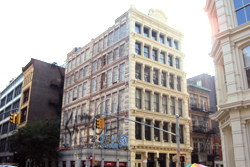 The six-story and six bay wide neo-Grecian style building at 112 Prince Street was designed by Richard Bergin in 1889 for Louis & Samuel Sachs. Early tenants of the building included Fabric Concerns and a toy factory. Famous artist Richard Haas painted the trompe l’oeil mural on the east wall imitating the design of the building’s iron façade in 1975. The ground floor as been home to the Mimi Ferzt Gallery since 1993 and Maya Lin, the noted sculptor of the Vietnam Memorial in Washington D.C, also lives and has a studio within the building.

112 Prince Street was designed by Richard Berger in 1889 for Louis & Samuel Sachs. Construction of the store commenced on May 22nd 1889 and was completed January 29th 1890. This was one of the last cast-iron buildings developed in Soho. Richard Berger was well established as an architect in New York City by 1883 and continued in private practice until 1916. Berger established a partnership with his son in 1916 to create Richard Berger & Son, which remained active through at least 1940. Berger was responsible for building several other cast-iron buildings in Soho as well as other buildings in Tribeca and the Ladies Mile Historic District in midtown.

Early tenants of 112 Prince included Fabric Concerns and a toy factory. During the 1970s, many of Soho’s historic buildings were converted to artist lofts. 112 Prince Street was no exception. By 1975, the upper floors had become work/live lofts for artists. A mural was painted on the east wall of the building by famous artist Richard Haas. Haas and a friend proposed using the crude brick wall as a canvas for what they called a trompe l’oeil mural imitating the design of the building’s iron facade in the early 1970s. The mural was completed in April 1975 with a grant from the National Endowment of the Arts.

In June of 1993, the ground floor became the home of the Mimi Ferzt Gallery, specializing in non-conformist Russian contemporary art. A bronze statue created by a St. Petersburg artist of Cybelle, the goddess of fertility, stands on the sidewalk outside the gallery.

The noted sculptor of the Vietnam Memorial in Washington D.C., Maya Lin, currently lives and works out her studio on the upper floors of 112 Prince Street.

The six-story iron front building at 112 Prince Street was designed in neo-Grecian style. Each story is nearly identical; though, each floor is slightly shorter in height then the one below it. The slender colonnettes stand on pedestals and have stylized capitals, which support impost blocks topped by cast iron rosettes. The ones on the ground floor are considerably taller then those on the top. Each level is marketed with an entablature that is capped with a decorative block supported by paired consoles at each end of the building. The building is six window bays wide and has a raised pediment with a sunburst design on it centered across the roof cornice.