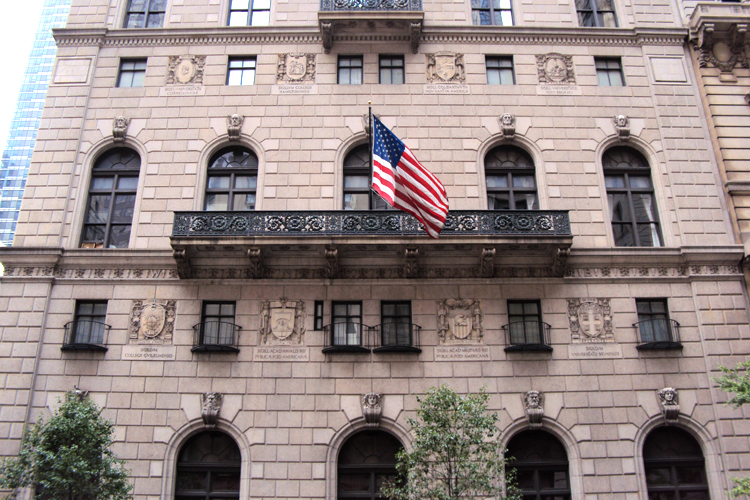 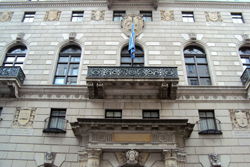 The University Club, located at 1 West 54th Street, was designed by architecture firm McKim, Mead and White, whose partners were all club members. The University Club was founded in 1865 by a group of recent college graduates hoping to maintain their collegial ties. Before moving into their new clubhouse in 1899, the club had been based out of a townhouse on 26th Street and Madison Avenue. However, the size of the building put constraints on the number of members allowed, making it necessary for a larger building to be obtained. The plot where the new clubhouse was erected was previously the site of St. Luke’s Hospital.

During the late 1800’s, Manhattan’s elite social center continued to move further uptown, seemingly staying a foot ahead of commercial expansion. However, the Vanderbilt family built half a dozen large mansions on Fifth Avenue between 50th Street and 60th Street, securing the strip as a prominent residential address.

While vacancies existed, property on the strip was in increased demand. St. Luke’s Hospital had occupied the block between 54th Street and 55th Street on Fifth Avenue. However, the hospital relocated to West 113 Street, leaving lot vacant.

At the time, the University Club was looking to expand into a larger building. Membership in the club was limited, due to the size of it’s building, to 1,500 members living in New York and 900 members living elsewhere. Furthermore, 600 people were in the waiting list to join the club. After also considering two other properties, the club acquired the St. Luke’s plot and began building its clubhouse.

The University Club was founded in 1865. The founders consisted of a group of recent college graduates that had hoped to maintain and extend their collegial ties. The club had been housed in various temporary locations before finding a permanent home within a townhouse on 26th Street and Madison Avenue in 1883. The club remained at their 26th Street location until the opening of their Fifth Avenue clubhouse.

The prominent American architecture firm of McKim, Mead, and White, who also designed the Metropolitan Club at 60th Street, were awarded the commission. All three of the firm’s partners were members of the University Club. Their design of the building set the standard for urban clubhouses.

The clubhouse opened in 1899. The membership limits, governed by the size of the new building, were increased to 1,700 New York City Residents and 1,300 nonresidents. By 1903, membership had increased to 1,695 New York Residents and 1,105 nonresidents, nearly reaching the building’s limits. Entrance fees were set at $200 and annual dues were $60. The University Club is general considered an architectural masterpiece.

Over the years, the University Club’s façade became darkened with soot. In the mid 1980’s, the façade was cleaned, exposing the originally granite. In 2005, the bronze metal, dark green stained balconies removed, repaired, cleaned, and waxed. The rich dark green stain, which accents the building, was preserved.

The University Club was constructed of pink Milford granite from Maine. The six-story clubhouse appears to be only three-stories the use of high arched window openings. The building is further accents by a series of balconies with lush bronze railings and a richly modeled cornice.

The building was designed around an enclosed courtyard or cortile. Each of the surrounding floors received different treatments. 25-foot tall Connemara marble columns surround the central entry court. The centerpiece of the design is the second floor library. The highest main level holds the dinning room, which is one of the most elegant dinning places in New York.