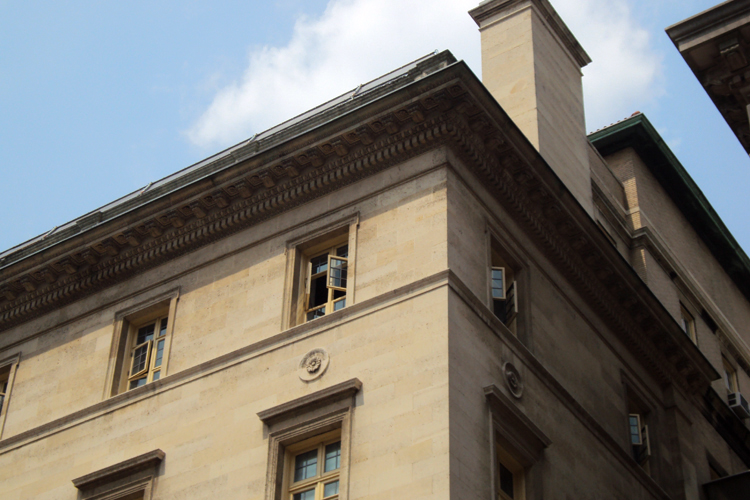 The Convent of the Sacred Heart School 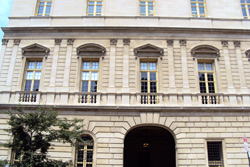 1 East 91st Street was built for Otto Kahn between 1914-1918. Kahn was a partner at the investment firm Kuhn, Loeb & Co. and also a well-known patron of the arts. He hired architects Armstrong Stenhous and C.P.H Gilbert to design his residence. Gilbert had studied at the École des Beaux-Arts in Paris and was known for designing townhouses and mansions. The mansion was modeled after the palazzo della Cancelleria of the Papal Chancellery in Rome. After Kahn’s death in 1934, the mansion was sold to the Convent of the Sacred Heart, a private, all-girls Catholic school.

The Otto Kahn Mansion sits within the neighborhood known as Carnegie Hill, which got its name when Andrew Carnegie built a mansion there in 1901. Kahn acquired the property at 1 East 91st Street, where his mansion would be built, from Andrew Carnegie in 1913.

Kahn was born in Manheim, Germany on February 21, 1867. As a young man, he worked at the Deutsche Bank and was set to their London office in 1888. He became a naturalized British citizen. In 1893, he accepted a position with Speyer and Company of New York and relocated to the United States. He married Adelaide "Addie" Wolff on January 8th, 1896. He later joined Kuhn, Loeb & Co. in New York City, where his father-in-law, Abraham Wolff, was a partner. Kahn was eventually made a partner of the firm. The firm became extremely successful financing railroads. Kahn gave up his British citizenship and became a United States citizen in 1917.

In addition to being a partner at Kuhn, Loeb & Co., he was a trustee at the Massachusetts Institute of Technology and Rutgers College. He was also a director at the Equitable Trust Co. of New York and the Union Pacific railway.

Kahn was also an influential patron of the arts. He served as chairman of the board of directors at the Metropolitan Opera Company of New York, the New York committee of the Shakespeare Tercentenary and the French Theatre of New York. He also founded and later served as treasurer of the New York Theatre Co. He was an honorary member at the Phi Mu Alpha Sinfonia music fraternity.

Otto Kahn financially and personally supported the works of numerous artists including Hart Crane, George Gershwin and Arturo Toscanini. He was also smitten with Hollywood. Members of his banking house were board members at Paramount Pictures.

Kahn hired architects Armstrong Stenhous and Charles Pierrepont Henry Gilbert (also known as C.P.H Gilbert) to design his Carnegie Hill Mansion in 1913. Gilbert had studied at the École des Beaux-Arts in Paris as well as in America. He later designed buildings in mining towns in Colorado and Arizona before setting up his New York practice in 1886. In 1888, he received a commission to design the Rachardsonian Romanesque mansion in Park Slope, Brooklyn. Afterwards he became known for designing townhouses and mansions. By the 1920’s he had designed more then 100 New York mansions.

After four years of construction, the building was completed in 1918, and served as Kahn’s New York City residence. The mansion was designed in neo-italian renaissance style and modeled after the palazzo della Cancelleria of the Papal Chancellery in Rome.

The mansion consisted of 80 rooms, in addition to living quarters for 40 servants. There is an indoor courtyard, garden, oak-paneled library, spacious reception room and private driveway. Kahn’s former music room on the second floor once served as a recital hall for famed Italian opera singer Enrico Caruso. The first floor parlor provides spectacular views of Central Park and the Cooper-Hewitt Museum, formerly the home of Andrew Carnegie. Kahn kept an extensive art collection inside his mansion, including tapestries, glass chandeliers, and paintings by Boticelli.

After the death of Otto Kahn in 1934, the mansion was sold to the Convent of the Sacred Heart, a private, all-girls Catholic school. The Convent of the Sacred Heart, was established in 1881, and is New York City’s oldest private school for girls. The Convent was established by the Society of the Sacred Heart, a Catholic congregation formed in France in 1800. The school was originally housed in a brownstone building located on Madison Avenue and East 54th Street. By the 1930’s, the school had outgrown the brownstone and acquired the Kahn Mansion. In the 1940’s the school also acquired and expanded into the Burden Mansion next door.

In 1974, the Otto Kahn Mansion was designated a landmark by the New York City Landmarks Preservation Commission.

The 80-room Italian Renaissance-palazzo style mansion was modeled after the Cancelleria in Rome. On the second floor, there is an L-shaped foyer, with a massive carved stone fireplace, that wraps around the courtyard. The courtyard is located between the first and second floors and is considered by many to be one of the most charming outdoor spaces in New York. Stone balustrade railing surrounds the courtyard and provides a spectacular view of Central Park.