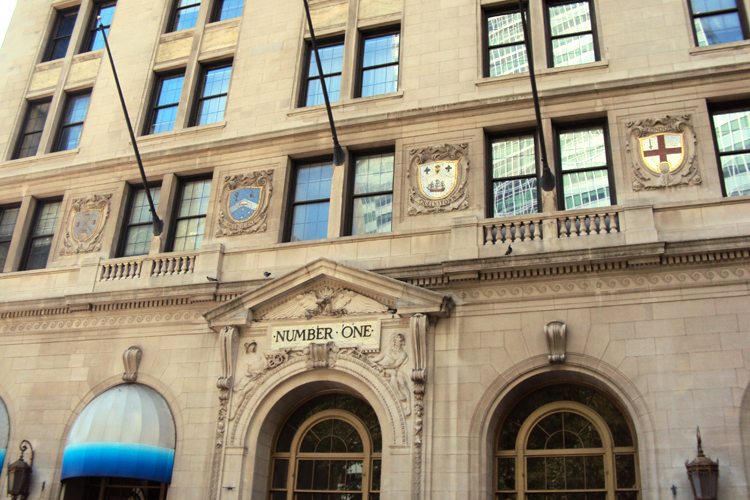 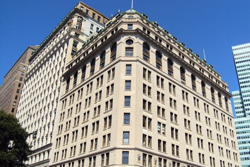 The site where 1 Broadway is located has long had historic significance. This was once the site of the Kennedy House, which served at the headquarters for General George Washington and Major General Henry Lee during the American Revolutionary War. The old building was demolished and a new commercial building, known as the Washington Building, was erected in 1884. The building was purchased in 1920 or 1921 by International Mercantile Marine and remodeled shortly after with the maritime theme still seen today.

The site that 1 Broadway was built on along with the surrounding areas has long been of historic significance. Nearby Bowling Green is a small public park at the foot of Broadway next to the site of the original Dutch fort of New Amsterdam. Bowling Green is the oldest public park in New York City. The old fort was the administrative headquarters for the Dutch then British rule of New York from 1625 until 1788 when its was torn down following the American Revolutionary War.

The spot where 1 Broadway is currently located was the location of the Kennedy House in the late 18th century. The Kennedy House served has the headquarters for General George Washington and lesser-known Major General Henry “Lighthorse Harry” Lee. In addition to his military duties, Lee was also the ninth Governor of Virginia.

In 1884, the old Kennedy House was demolished and architect Edward H. Kendall designed the Washington Building in honor of its predecessor. The Washington Building was designed as an ornate commercial building. Kendall was a Boston native but also studied in Paris. He established his own practice in New York and also served as the president of the American Institute of Architects.

The building was purchased in 1920 or 1921 by International Mercantile Marine Company, later known as the United States Lines. Shortly after in 1921, the 1 Broadway was extensively refaced and remodeled with a maritime theme, which was designed by Walter B. Chambers. Their competitor, the Cunard Line, had completed a similar update two years earlier.

Current tenants include a branch of Citibank on the ground floor and Kenyon & Kenyon, an intellectual property law firm, on the upper floors. The former booking room is now used as the banking floor.

The renovated building located at 1 Broadway is detailed with unique shells and sea icons around the entryway. Colorful Venetian mosaic shields of great port cities are alternated on the windows on the on the second floor. There are marble floors inside with two enormous murals depict shipping lanes. The booking room was modeled after an 18th century ballroom. Perhaps the most unique feature is the two side doors depicting "First Class" and "Cabin Class" entrances.